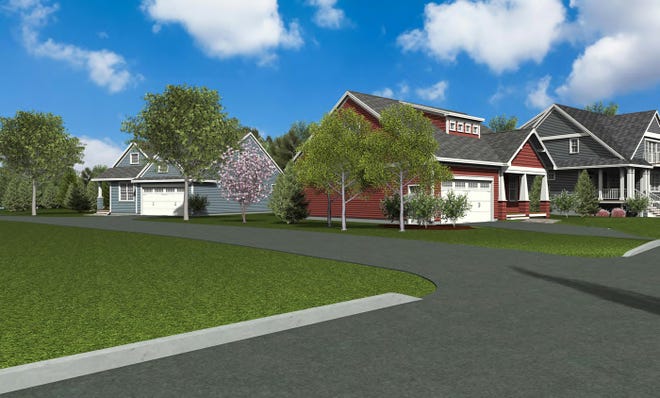 PORTSMOUTH — Construction is under way at the Village of Banfield Woods, a development of 22 free-standing homes ranging in size from 2,000 to 3,500 square feet.

The development, which is located off Banfield Road near Lafayette Road and about 10 minutes from downtown, is the only new project in the city focused on building detached single-family homes, rather than condos or apartments.

“The Banfield homes are part of a condo association, which maintains the grounds and the landscaping so it’s maintenance-free living, but all the homes are free standing homes,” said Jenna Green of Green & Company Real Estate and Development, which is developing the project. “Obviously it’s something different for Portsmouth than what people have seen for a while.”

Green said single-family homes are in demand “in a competitive market where inventory is extremely limited and the majority of available properties are 35-plus years old." She said buyers "can choose their home style, make floor plan customizations and select their finishes from a wide range of options."

Every home will have a two-car garage and its own yard, but there’s a variety of home sizes and floor plans, Green said.

“We just thought that the site is well suited for this,” she said.

Green space is an important component of this new development, which is surrounded by woods off Banfield Road, Green said, citing "trees, shrubbery, and flowering plants,” she said. “Each home has a private deck or patio off the living space, and some plans additionally offer a covered front farmers porch."

The floor plans are aimed at a variety of ages whether it’s young couples buying a bigger home or seniors trying to downsize so they can “live entirely on the first floor,” Green said.

“Other plans boast three-plus bedrooms upstairs and open living area and office space on the first floor,” she said. “Each style has expansion possibilities with the option of finished bonus rooms, finished basement space, and sunroom or family room wings.”

Green & Co., a family-owned company in North Hampton for more than 30 years, is also planning to develop another development of 56 single-family homes off Peverly Hill Road.

The project, which is scheduled to appear at the September city Planning Board meeting seeking site plan approval, will be built on a 110-acre site off Peverly Hill Road near Calvary Cemetery, developers have said previously.

In addition to the 56 single-family homes, the development is planned to feature two pocket parks and a pedestrian and bike path that would be open to the public and connect to the Boston and Maine rail trail.

The 56 homes are proposed to be located on about one-third of the roughly 110-acre site. The remainder of the property is planned to be set aside as a conservation easement, according to Corey Colwell, a vice president at TF Moran who represented the developers at a recent city meeting.

Green & Company additionally has an upcoming neighborhood of townhomes called Bartlett Green on the corner of Lafayette Road and Ocean Road coming to the market later this year.